Representatives of Port Manatee, Southern Manatee and Braden River Fire departments joined Myakka City firefighters and paramedics to become familiar with a “mass decontamination apparatus,” which looked like a large, three-prong sprinkler system. The sprays of water created when the device is hooked to a hydrant or pumper truck would be used to remove chemical agents from victims of an intentional or accidental incident. Henry Sheffield, deputy chief and fire marshal of the Braden River Fire District and former head of the hazmat team, said decontamination is important not only to the health and safety of the victims themselves, but to the general public. “We cannot allow a contaminated person to enter the hospital,” Sheffield said, “whether we have to do the decontamination in the field or out in the parking lot.” “One contaminated person can knock the entire hospital off line.” Sheffield said the new device will save precious time.

“…TridentOne will provide us with the opportunity to begin emergency decontamination quickly and easily.”

“Terrorism is a Real Concern,” review by Robert Burke:

Terrorism is a real concern at the University of Maryland Baltimore. We are located in a metropolitan area just 30 minutes from Washington D.C. In addition to terrorism there are also several chemical plants, rail lines, interstate highways, and waterways near downtown Baltimore and the University Campus. University Hospital and Shock Trauma are 1/2 block from my office. This is a likely location for contaminated and “decontaminated” patients to be brought from a chemical release or terrorist event. Hundreds of people may choose to bring themselves to the hospitals here at the University. We feel that the TridentOne will provide us with the opportunity to begin emergency decontamination quickly and easily using one of several fire hydrants near the emergency room entrances. Because of the design of the TridentOne, it is not labor intensive to install and does not take personnel away from other important functions during a chemical or terrorist event. Once in operation the unit takes care of itself in terms of operation. I would recommend the TridentOne for use at any facility that might have a need for quick and easy emergency decontamination. We also have a hazardous materials response team here at the University and I have been on several teams in the fire service. From an emergency response standpoint I also see a need for the TridentOne. Even though the device is designed to be used on the discharge of pumpers and aerial devices and works well there, using the device on a hydrant would free up those units for other operations. It is easy to store and easy to place in service.
Robert Burke
Fire Marshal
University of Maryland
National Fire Academy Instructor
Firehouse Magazine Contributing Editor (Hazmat Studies)
Firehouse.com Contributor
(Street Chemist and Hazmat Team Spotlight)
Firehouse.com Hazmat Forum Moderator
www.hazardousmaterialspage.com

…”this (TridentOne) should be part of every school’s emergency procedure.” 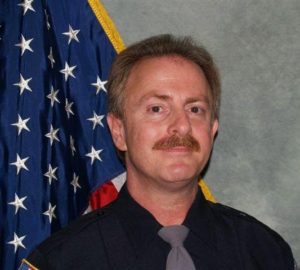 I just have a “gut” feeling this should be part of every school’s emergency procedure. Most schools have a fire hydrant nearby and this would make a great staging/decon assembly point. We are in a “lock down” school mentality since the Columbine incident but need to be prepared for other situations that would warrant the school populations to egress from the school into a “safe haven” and decon area until the Fire/EMS first responders arrive. I feel that every hospital should have their security team able to set up this unit and direct “walk ins” to this area for Gross decon assembly until the hospital decon team has the time to set up the “tents” for secondary decon. Just makes sense!
Bob Tollise
Manatee County Public Safety: Hazmat Coordinator
See more from Bob Tollise in the Mock Disaster video.